The Bangladesh Economy: Diagnoses and Prescriptions 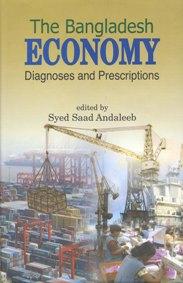 The Bangladesh Economy: Diagnoses and Prescriptions represents a compilation of articles drawn from the Journal of Bangladesh Studies where they were originally published at various times. The selection of the articles was predicated on two main criteria: their immediate relevance to the Bangladesh economy and the reputation of the authors who have a solid record of publications in international journals where they have influenced the thinking of others through their insightful writing.

The articles in this book cover a gamut of important areas that concern economists and have the potential to shape economic thinking in Bangladesh. Among the important themes covered by the authors are: macroeconomic issues, trade reforms and their impact, trade and international migration, determinants of aggregate import demand, impact and influence of foreign aid on government decision-making, foreign aid and GDP growth, money supply and output prices, effects of political instability on domestic savings, population growth and its relationship to per capita income growth, the effects of microcredit in poverty alleviation, the contributions of small and medium industries despite their lack of access to formal bank credit, microfinance and sustainability of self-reliance, compensation reform for the government labor pool, and performance of the non-financial state-owned corporations.

Compilation of the articles in a single source is expected to serve as a valuable collection of essays to peruse and build upon by students, researchers, scholars, and practitioners involved with economic thinking and application.

Syed Saad Andaleeb, Ph.D., is Professor and Program Chair of Marketing at the Sam & Irene Black School of Business at Pennsylvania State University, Erie, USA. His Ph.D. is from the University of Illinois at Urbana-Champaign, USA. He is also the Editor of the Journal of Bangladesh Studies. Dr. Andaleeb has published in prestigious international journals and his work is widely cited by scholars and researchers. He is a member of the Editorial Board of International Journal of Health Care Quality Assurance, Journal of International Consumer Marketing, Journal of Knowledge Globalization, Journal of Transnational Management Development, and Brand Forum. He also serves as a reviewer for numerous other journals. He was a Senior Fulbright Fellow in 2003, followed by two stints as Fulbright Senior Specialist in 2005 and 2006. He is also serves as a reviewer of applicants to the Fulbright Senior Specialist Program. Dr. Andaleeb has been recognized for his teaching, research and outreach skills by the Council of Fellows Excellence in Research and Outreach awards at Penn State and was the recipient of the �Professor of the Year� award by the Graduate Student Association at Penn State Erie. He has served on Pennsylvania State University�s Faculty Senate, Promotion & Tenure Committee, and the Graduate Council, all university-wide appointments.