Bangladesh Economy in the 21st Century: Selected Essay from the Harvard Conferences in 2008, 2009 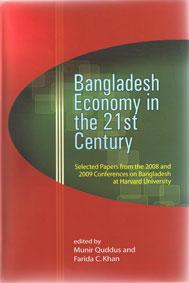 Since the beginning of the 21st century, the economy of Bangladesh has surprised even the most astute observers and development agencies at home and abroad. In recent years, the economy has been resilient and impressive. In a pioneering book in the early 1970’s Faaland and Parkinson called Bangladesh a “test case for development.” Their point was that if Bangladesh could succeed, there was hope for other poor and less developed nations in the world. Forty years after this challenge, today Bangladesh presents a model of how with grit and perseverance, a nation can overcome great odds to emerge as a successful economy.

The book chronicles some of the successes, strategies and hopes for the future.  Additionally, it presents sound policy recommendations for the continued success of the Bangladesh Economy in the 21st century.

The papers are organized in four sections and twenty chapters.  The book includes contributions on a wide variety of economic development topics from a distinguished panel of contributors.  The authors are based in different parts of the world and bring their varied expertise to their research.  The readers will appreciate the diversity of background and expertise of the contributors that has produced an extraordinary healthy mix of perspectives, an important strength of this collection. These papers were presented in two unique conferences organized by the Bangladesh Development Initiative (BDI) with partners in 2008 and 2009 at the Ash Institute, Harvard University, Boston, USA.

Munir Quddus is a Professor of Economics and Dean of the College of Business at Prairie View A&M University, Texas, USA.  He earned his doctoral degree in economics from Vanderbilt University in 1985.  Dr. Quddus has published on the history of economic thought, higher education, and economic development issues in Bangladesh. He co-authored (with Salim Rashid) Entrepreneurs and Economic Development: The Remarkable Story of Garment Exports from Bangladesh (Dhaka: UPL, 2000), and co-edited (with Farida Khan and Ahrar Ahmad), Recreating the Commons? NGOs in Bangladesh (Dhaka: UPL, 2009). Munir is a past President of the Association for Economic and Development Studies on Bangladesh (AEDSB), and currently serves on the editorial board of the Journal of Bangladesh Studies (JBS) and as the President of the Bangladesh Development Initiative (BDI).

Farida Chowdhury Khan is a Professor of Economics and Co-Director of the Center for International Studies at the University of Wisconsin – Parkside.  She received her doctoral degree in economics from the University of Maryland in 1990.  Farida has taught economics, political science, history, women’s studies and international studies.  Dr. Khan’s recent work has focused on the question of indigenous peoples and development policy.  She has co-authored two volumes, Contemporary Economic Issues in Bangladesh (Dhaka: UPL, 2006); and co-edited (with Ahrar Ahmad and Munir Quddus), Recreating the Commons? NGOs in Bangladesh (Dhaka: UPL, 2009).  Farida serves on the editorial board of the Journal of Bangladesh Studies (JBS) and as the Secretary of the Bangladesh Development Initiative (BDI).